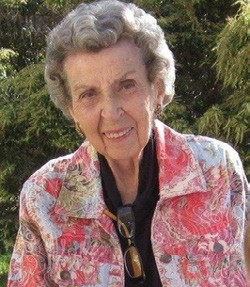 Barbara graduated from A.B. Davis High School in Mount Vernon, New York and Barnard College, New York City, with a major in geology. She married Herman Martin Bates on March 25, 1950. From 1950-1953, they lived in St. Louis, Missouri where they worked for H. Bates Company, a family owned fabric business. After moving to Ossining, she was Deputy Supervisor for the Town of Ossining from 1960-1963, and was subsequently elected Receiver of Taxes from 1971 until her retirement in 1990. She was a 73-year member of the Daughters of the American Revolution (DAR). She was affiliated with the New York Mohegan, Melzingah, and Enoch Crosby Chapters, the Rhode Island Independence Chapter, and the Martha’s Vineyard Seacoast Defence Chapter. She was also a sustaining member of the Junior League of Westchester, the Ossining and Westchester Women’s Clubs, the Rhode Island, Ossining and Westchester Historical Societies, and the Glocester Heritage Society (RI).

After Herman’s death in 1999, Barbara moved to Brewster, New York and actively continued her community work, volunteering at the Putnam Community Action Partnership (CAP), the Putnam Humane Society, the Landmarks Preservation Society of Southeast, and was a member of the Brewster/Carmel Garden Club.