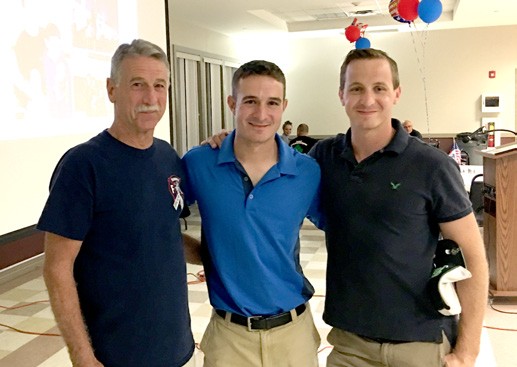 Chris Roberto comes from a long line of emergency responders.

His dad, Vincent Roberto, a past chief for the Mahopac Fire Department and retired White Plains firefighter, and his brother, Andrew Roberto, captain with the Mahopac FD as well as a career firefighter with the Hartsdale FD, were first on line to call out “surprise” Friday evening when some 100 family, friends and fellow firefighters toasted Chris on his return from the military.

The first lieutenant was assigned to the 101st Airborne based in Fort Campbell. Chris served in Afghanistan where he received a Bronze Star citation.

In 2010, while a senior at Mahopac High School, the younger Roberto joined the fire department in Mahopac. Chris applied to the U.S. Military Academy at West Point and in 2015 he graduated being commissioned as a second lieutenant.

Roberto thanked his family and friends for the evening: “It’s great to be home to such a loving community. Mahopac, like other towns around our county and country, is supportive of the military. We served well and we served with pride.”

Cases Increase Across County; Peak Not Here Yet; Social Distancing Still the RuleCORONAVIRUS DEATH TOLL AT 15Metro-North Scales Back Service