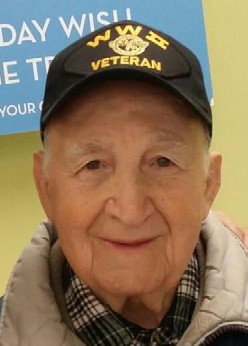 Christopher (“Christie”) William Dentato of Putnam Ridge, Brewster, NY, formerly of Stormville, NY, Eastchester, NY and Bronx, NY, passed away on March 9, 2019, at the age of 94.

Christie was a life-long employee of the supermarket industry, managing a number of stores in New York City and Westchester County, first for Safeway, and later for Daitch Shopwell, in a career that lasted from the 1950s until Christie’s retirement in the late 1980s.

Christie was a big fan of the Yankees, the Mets, the football Giants, the Jets, and NYRA horse racing. A warm, kind-hearted, mildmannered gentleman, and an amazingly patient and caring husband and father, one of Christie’s favorite expressions was, “It never hurts to be nice!”

In addition to his loving wife, Christie was predeceased by his parents, two brothers (Nick and Louis) and two sisters (Mary and Sylvia).

Christie is survived by his loving sons, Christopher, Jr. (and his wife, Dawn) and William (and his wife, Gisella), as well as his sister, Emily, and several stepgrandchildren, in-laws, cousins, nephews, nieces, grandnephews, grandnieces and friends.

Visitation for Christie will be held on Tuesday, March 12th, from 4 PM through 8 PM, at the Cargain