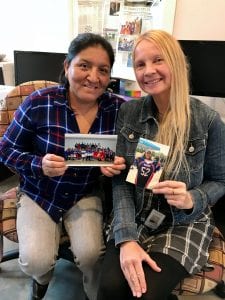 I come into this story at the point Lisa Piccolino emailed me. Her son plays on the Carmel Rams varsity football team, Gianluca Piccolino. He’s No. 72. They’re having a pretty hot season, though that’s not why she sent me a note. You see, Lisa’s good friend Carmen Ludizaca also had a son on the team, Jaime. He played for the varsity team last year, No. 52. This is where the story really begins, with Jaime.

After graduation last year, he signed up for the Marine Corps. He’s at Parris Island now; it’s the Marine Corps training site for new recruits. Side note: I continue to be amazed, and I have written this before, about the high quality of youth who voluntarily sign up for the military. It is one of a small number of professions to be demonstrably dangerous, with long periods away from home, and it entails considerable sacrifice. Still, it attracts strong, competent and bright young people.

So Lisa talks with another team mom, Janet Filangeri, as to whether they could make a card and have the team sign it. She runs with the idea. The team and coaches sign; the team photographer, Adrienne Kamalsky, gets a shot. Because Carmel was recognizing alumni who were past or present service members during Homecoming last month, Jaime was among those hailed for his service to the nation. This team effort was a big deal, almost like a super-secret play. They even found Jaime’s jersey from last year to present to his mom, Carmen, during Homecoming. I spoke with Lisa and Carmen a few days ago. She was overwhelmed by the love and support of the team.

Jaime graduates from boot camp Nov. 21. His family is headed down for the ceremony, with a package from Carmel, the card signed by everyone, and the now famous jersey, No. 52.

I am grateful that Carmel has recognized those who joined the service. Sometimes our schools gloss over that as a career choice, but it is an honorable one. And we should all be grateful to Jaime Ludizaca.

Douglas Cunningham is editor of both the Courier and its sister paper, the Putnam County News & Recorder, in Cold Spring. Reach him at 845-265-2468, or by email at editor@pcnr.com. NOTE: Campaign season is wrapping up. If you have a letter to the editor about the campaign, it MUST be in my email by 9 am next Monday.