World War II On My Mind 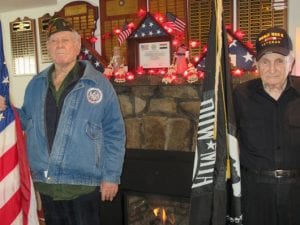 Two of the greatest generation, Ray Matthews (left) and Jim Dipelesi, were recognized at the Pearl Harbor Day ceremony in Mahopac. Photo by Eric Gross

I’ve been thinking a lot about World War II lately. Particularly, of course, because of the rapidly diminishing number of WW II veterans, here in Putnam and nationwide. Almost all are in their 90s now, some older. And every year, inexorably, there are fewer remaining vets from “the greatest generation.”

But other factors come into play, too. One is that I recently listened to In Harm’s Way, The Sinking of the U.S.S. Indianapolis and the Extraordinary Story of Its Survivors. The book details the sinking of this heavy cruiser, which led to the greatest single loss of life at sea from a single ship in the history of the Navy. By the time a search was genuinely and belatedly underway, many of the crew had died of dehydration or shark attacks. Of 1,195 crewmen, just 316 survived.

Think of it. The ship had just carried, at high speed, parts of Little Boy, one of the nuclear bombs that would be dropped on Hiroshima just days later. Of these 879 young men who would die, almost none knew of the ship’s true mission. They could not have foreseen the terrible destruction the atom bomb would wreak. And in late July, before the sinking, they would not have known they had only days to live.

The book, with much new information, first came out in 2001. But the audio edition (I listened on Audible.com) came out relatively recently, in 2016. I commend it to your attention. It’s a great listen. It is, in parts, agonizing, to think of the sacrifice and leadership and moral courage present in so many of them, and so young. It is also a window into a piece of World War II that, unless you had a relative in the Navy, few of us would understand in such a visceral way.

Another reason, of course, to be thinking about WW II is the nationwide mourning and burial last week of former President George H.W. Bush. I don’t want to go back and re-litigate Bush’s failures and successes. But my goodness – those were leaders, Bush included. Two points that I think are too often unremarked on: 1, The impact of military service, and its searing experiences, on political and civic leadership. I am convinced that military service is an important attribute in a candidate for high office. And, 2, the passage of the Americans with Disabilities Act, which clamped down on discrimination and began an effort to make places and institutions accessible to everyone in the general public, not just those healthy enough to zip up a flight of stairs. This was a big deal, and its impact has been far-reaching.

And finally, in this list of memory prompts, last Friday was Dec. 7, the anniversary of the Pearl Harbor attack that brought the United States into World War II, and the full might of U.S. industry and our military. An entire nation, shifted, to produce tanks instead of cars, to design atomic bombs in secret, to churn out bombers and rifles and war materiel. Could we do it today?

A note on schedules during the holidays: The Courier will be published one day early, and will be on newsstands and at post offices on Dec. 24 and Dec. 31 (Mondays). But to navigate a very heavy schedule at our printer, and to allow employees time off, we do ask that you submit both advertising and editorial copy early. Advertising requests for the Courier should be made by the Friday before, where usually it’s Monday.