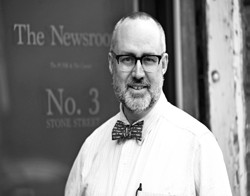 Independence Day will, if we are fortunate, dawn bright and sunny, with no monsoon. Think with me, for a moment, on what those before us had to do to secure liberty.

Make fortifications on Constitution Island early in the Revolutionary War. The Hudson River was seen as the key to controlling the Northeast, the key to keeping the British from splitting the fledgling country.

Ride miles on horseback in the dark of night, accompanied only by thundering hooves, as Putnam’s own Sybil Ludington did to warn the militia of the sacking of Danbury. At 16 years old. 16! Think of it. And Maj. Gen. Israel Putnam, the county’s namesake, who was a leading officer in the Revolution.

Or a century later, to work on farms and forges and in the West Point Foundry, turning out the Parrott rifled cannons that would help win the Civil War. Yet having won it, secured liberty for all, we seem today to have foolishly squandered and lost some of those gains. Gains secured at substantial cost of blood and treasure and lives. By the workers, too, in that foundry: Hot, dangerous, treacherous work. Those, friends, were industrial hazards of a scale most of us can’t even contemplate.

And now, in 2019, we seem unable to rouse ourselves even to be informed about what is true or false, to get beyond our own little silos of like-mindedness. It’s no wonder we’re so susceptible to the Russians. Really.

These gains came at great cost: In work, and commitment. Sometimes in injuries and lives. Sometimes even the fate of the nation was in the balance. We have so much history right here in Putnam County, history that ties us directly to the Revolution or the Civil War. Are we living up to the examples of a century and two centuries ago? Could we work in a foundry to put food on the table and save the Union?

I’m not suggesting that we need to be able to work in foundries or all is lost. But I think we need to do better, and be better. Be better examples for our children, and our communities. Be informed. Reach for our better instincts, not live down to our basest ones. We have such inspiration before us, from the Revolution to the Civil War to the Greatest Generation in World War II, and those on the home front who kept it together. Even now, so many dedicated people willing to be soldiers and sailors and cops and teachers in tough schools.

We can be better. July 4th is surely a good time to begin.

What I’m watching: Big Little Lies, season 2. What a cast! And now with Meryl Streep. I know some of the reviews of season 2 have been mixed. I don’t get it. It’s some fabulous television. Perfect? No. But pretty damn good. The series is on HBO. Definitely start with season 1.