A Quintessential Small Town, Down to Earth Celebration 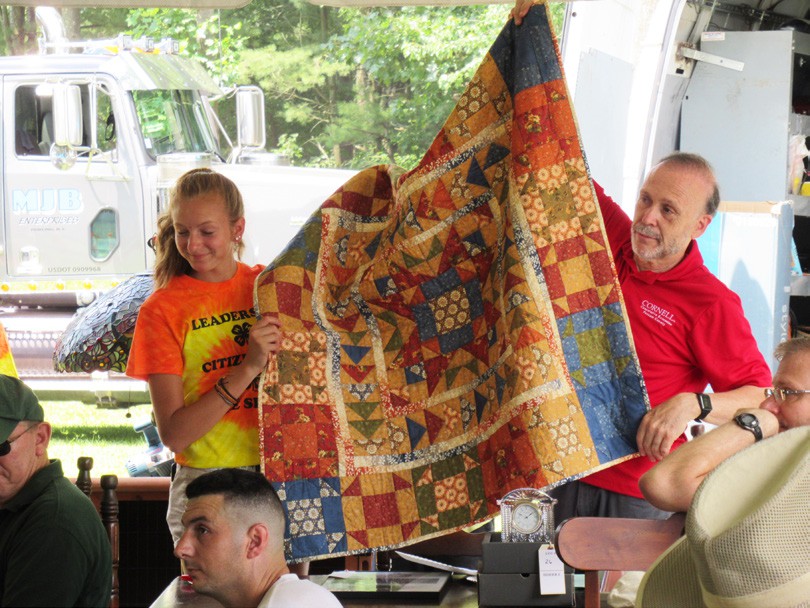 The 4-H Fair quilt, designed and handmade by Joan Newman of Kent, took 400 hours to create. It was sold at the 4-H Fair auction for $300. Paul Eldridge, at right, was also hailed for his years of volunteerism at the fair. Photo — Eric Gross

It truly is hard to beat a small-time county fair for a genuine good time. You can catch up with friends. Enjoy a hot dog with sauerkraut, and then another one with chili and cheese. See all the politicians, or nearly all of them, at once. The best such events are neither pretentious nor slick, and I think Putnam’s succeeds at being neither. Or, maybe it’s happenstance, but in any case, it’s good.

Friday was the fair opening. As I do most years, I attended. The opening ceremony was a little better than usual – and moving – due to the dedication of a 4-H bench in memory of the Honorable Judge James Reitz. His widow, Barbara Reitz, spoke and invited 4-H kids to be the first to sit in it. She told the crowd that she and Jim never missed an opening. Not a dry eye in the place at that moment.

Both judge candidates were there: Republican Joseph Spofford, of Carmel, and Democrat Camille Linson, of Philipstown. I spoke with both. Both are bright, both personable. I know the conventional wisdom has it that in a county like Putnam, with a still strong Republican edge, Spofford wins going away. I’m not thinking that. I think Linson will make it a horse race. 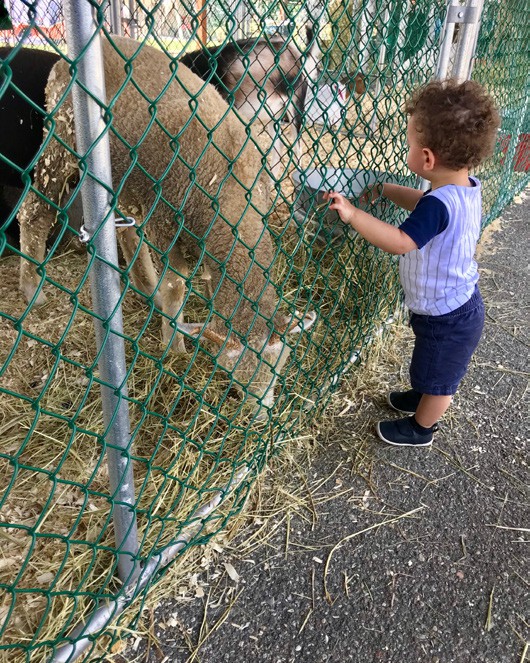 This youngster was fascinated by the sheep. As someone who has dealt with sheep close up on the farm, I was glad there was a fence. Photos here and below — Douglas Cunningham

I had a hot dog from the 4-H food stand with District Attorney Robert Tendy. It’s clear he’s a man used to eating on the run. He acknowledged that, and also told me he loves hot dogs. Good for a man in a hurry, I suppose. We covered the waterfront. He recounted that Reitz called him in some months into his tenure as DA, and said he needed to “own the job.” Puzzled, Tendy said he was working nearly constantly at being DA, virtually living at the office. How could he own it more than that? Reitz said, No, not that. You’ve got to get out, among the people. Let them know you own the job. Talk to them. See what they think.

Mighty good advice. Shifted his perspective, the DA told me. We finished our hot dogs – well, he’d finished long ago, I was slower – and we parted ways. I was still hungry, so I acquired a chili dog and joined a table with Assemblywoman Sandy Galef, the Democrat who represents Philipstown and Kent, and Lisa Hofflich, the Hudson Valley regional director for Sen. Kirsten Gillibrand. Galef said it had been a good legislative session in Albany – not everyone got what they wanted, but they got a lot done. Perhaps the first piece of that helped bring about the second? She also told me she is gravely concerned about election security and ensuring that voter machines and their records are tamper-proof. 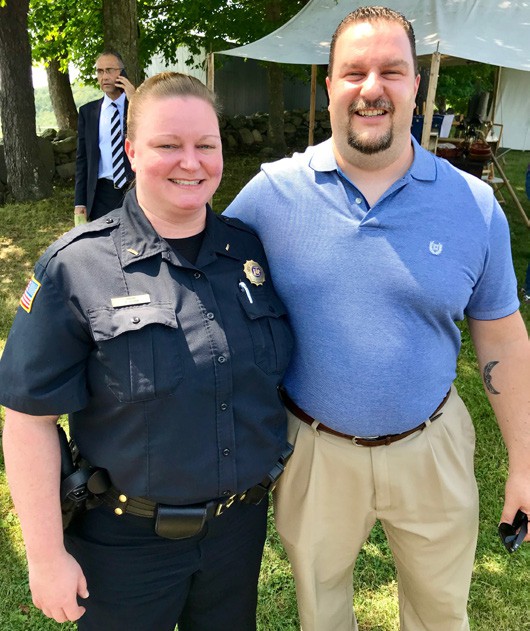 Lt. Tara Flynnis a newly minted lieutenant with the Kent Police — so new her nametag still says, “Sergeant T. Flynn.” She’s with County Clerk Michael Bartolotti. Below, Musician David Amram of Putnam Valley performed at the opening ceremony, as he has for years. District Attorney Robert Tendy, right, sat down to chat.

I took a gander at the animals, said hello to a few more people, and continued back to Grand Central headquarters in Cold Spring. It was a good opening day. Maybe county fairs are indeed something from another time. But Putnam’s seems able to bridge the time-space continuum.

I’m still hot about that Visitors Bureau fiasco by the agency’s Board of Directors, blowing up the website and shutting down the whole operation, throwing county tourism promotion into a spin smack in the middle of summer. In a statement dated Sunday, County Executive MaryEllen Odell – who I also spoke with at the fair – said the county is closing to choosing a new “resultsdriven director of tourism.” She said a panel has been interviewing candidates and she will forward her pick to the Legislature for approval.

The statement also said, “She thanked the Putnam County Visitors Bureau for its efforts and said the transition from a non-profit funded by county and state grants to an in-house county department would be swift and seamless. She also thanked the state I Love NY campaign for its generous support of Putnam tourism.” I don’t know why she’s thanking the Visitors Bureau. I suppose it’s politic, but it’s this board of directors that threw things into turmoil. Let me tell you, if the county ever trusts one of them with anything ever again, someone needs to have their head examined.

Perhaps next year the county can promote the fair? Just a thought.

CUNNINHGHAM’S CORNERWhere Is the County Response?The Business Viewpoint $2 Trillion Dollars In Relief funds … Where Is It Going?