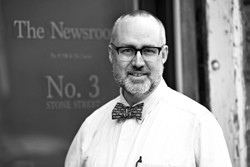 Monday was Veterans Day. Cold, but not bitterly so, as the 11th hour of the 11th day of the 11th month was marked across the county. As veterans gathered for the Pledge, brief remarks and prayers here in Cold Spring and around the county, I thought of my own father, an Army veteran. He was in training in the South and would certainly have been sent to Korea had that war continued. It ended, however fitfully, before he shipped out.

The experience seared his outlook on politicians. He came to think that they “stumbled into” war through a lack of planning or thought or attention. Inevitably, it would be people like my father, and so many of our fathers and mothers and brothers and sisters, who would pay the terrible price of this leadership failure by politicians.

I think about that “stumbling into war” concept often now. I think he’s right, and I think we still do it.

I don’t think it’s disqualifying if a candidate for president hasn’t served in the military. But I think it’s a good thing if they have, if they understand the terrible costs and import of sending soldiers and sailors and pilots into harm’s way.

In this issue, we have extensive coverage of the awarding of 100 Putnam County Service Medals on Saturday; see pages 1, 10 and 11. Wow. What a day, for patriotism and reflection and thanks. And 100 years after the Great War, what was supposed to be the last war, but, of course, wasn’t.

What I’m listening to: The podcast American Scandal, and especially the most recent episodes of New York State of Crime – Three Men in a Room. What do you suppose it’s about? Yes, indeed, our very own state and our very own state capital and the incredible tendency of some of our leaders to be wholly, to-the-core corrupt. Amazing, when you think about it, how much corruption there is.

And yes, this corruption has touched Putnam County, too, as we know from the Vincent Leibell case in 2010, in which a mere five days before the county executive election, he heard the government’s incriminating audiotapes and reviewed a damaging videotape against him – and continued blissfully and with more than a bit of conceit to the Nov. 2 election against now County Executive MaryEllen Odell. Didn’t say a word to his opponent, or the public.

Anyway, the podcast is a good listen. I was also taken with another series in the American Scandal podcast, the four-part piece on The Standoff at Wounded Knee. It was instructive and illustrative of the long trail of broken treaties in this country, and our nation’s grim, misguided and racist policies toward Native Americans, especially in the late 1800s and through the mid 1900s. I witnessed some of this racism while in Minnesota and South Dakota, and it was often systemic.

Douglas Cunningham is editor of the Putnam County Courier and the Putnam County News & Recorder in Cold Spring. Reach him at 845-265-2468. If you’d like him to speak at your civic group, just call or email, editor@pcnr.com.