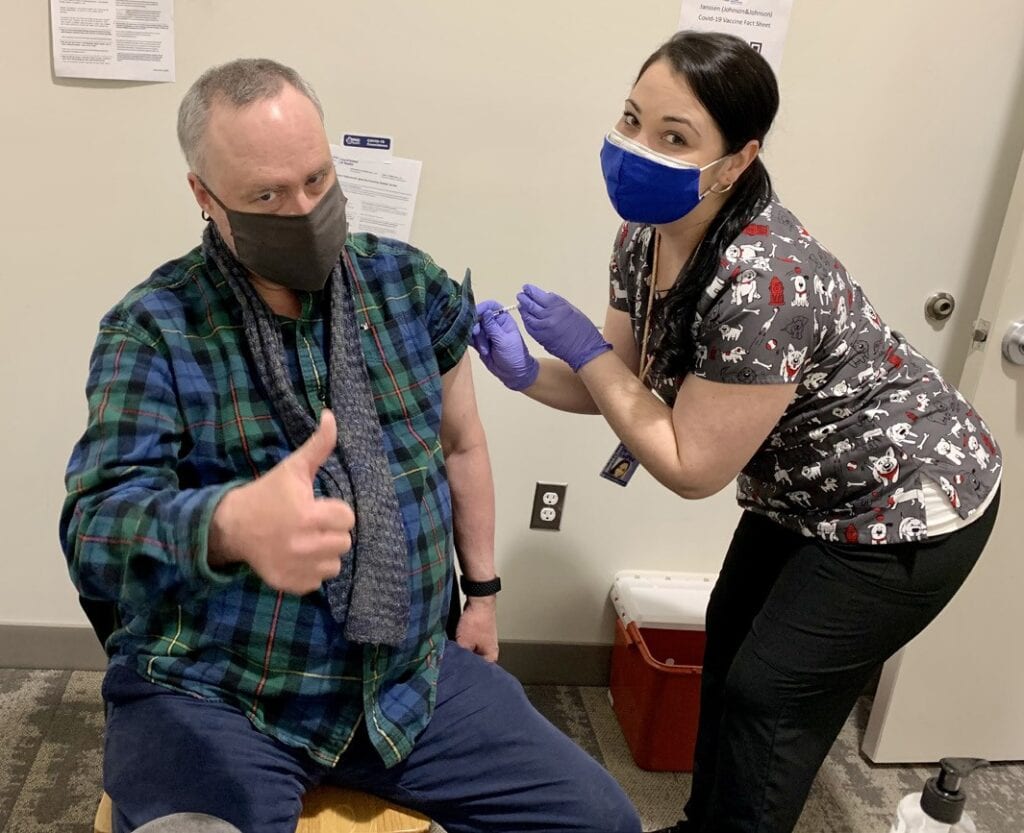 Below: Kristine Ramsey, an LPN with Westchester Medical Center, vaccinates the editor Sunday evening with the Johnson & Johnson vaccine during a pop-up event at Marist College.

By some complete fluke of timing, my partner had checked the NYS Health Department website for COVID-19 vaccine appointments on Thursday morning. As you know, the normal response from said website is to report there are appointments available in Plattsburgh, Rochester and Syracuse, and other far-away areas. And none, alas, where we are.

But Thursday morning, she found there were appointments available at Marist, with the new Johnson & Johnson vaccine. How about that? She was in a “virtual queue.” Another miracle of the modern age, waiting in line, online. Actually, that’s done by a number of websites, but it did strike me as a particularly New York state government adaptation to the system. Akin to expanding the best practices of the DMV, if you will.

I logged on, too. Turns out we were both able to nab appointments. Mine was Sunday evening. So Thursday was a red-letter day indeed, and Sunday even more so.

As you read this, I’ve been vaccinated. And I wonder: Is this the beginning of the end? The end of the beginning? President Biden now says that every American who wants a vaccine will be able to get one by the end of May, though Dr. Anthony S. Fauci said last week it would take some period of time after that, logistically, to distribute said shots. In any case, that’s two and a half months, or maybe 2½ plus a couple more. By the end of the summer, certainly. In the scheme of the hell of the past year, that’s not very long.

I wonder: Will this be, what’s that word, “normal”? Or some semblance of prepandemic normal? Of course, there is the issue of all those dead people. The parents, grandparents, children who are no longer with us. Some 521,000 souls as of Friday afternoon. That’s an astounding toll in one year from a disease that many likened to ‘the flu’ if not an outright ‘hoax.’ In a country as advanced and vaunted as the United States, more than half a million dead. In the history books, I believe this will be a debacle, an event of stunning incompetence and hubris. Think of it: Before this is done, we could well surpass the number of soldiers dead in the Civil War, widely regarded as 620,000, though that’s now seen as the low end. Until now, that was the nadir of death on American soil.

I am still angry about those COVID-19 deaths. I tear up sometimes, thinking about that terrible toll, in 2020 and 2021, in America. Of course, I’m old now, and soft, no longer the tough-as-nails journalist. So yes, I’m still deeply angry.

Years on, I think the pandemic will also be judged to have had other impacts, the full import we may not yet be able to see.

* The Black Lives Matter movement gained pretty incredible momentum after the killing of George Floyd on May 25, 2020. It is, I think, a striking and important coincidence that so many people were working from home due to the pandemic, and had time available to process this. Some number of those people then chose to protest this situation, protests that continued for many days and then months across the nation, including in Putnam County. Floyd’s killing put a renewed focus on how police interact with black people, but I suggest that the police response to the protests — over the top, in a number of communities, but thankfully not here — has intensified this focus.

*The “office” is no longer necessary for many occupations. Not all bad. But I believe there are downsides to come, including a belated recognition that some of us are now at work constantly. Too, many employees are now responsible for costs — de facto office space, highspeed access, etc. — that employers used to cover. In any case, this should be, I think, good for Putnam County as a desirable place to live.

*The handshake as a business greeting is dead. Maybe not dead, but pretty close to it.

*I don’t see business travel recovering, at least not to its former level. Air travel in general, ever since 9/11, has been a grind. Will it recover yet again? Somewhat, yes. On the other hand, I think leisure travel will accelerate by a lot — we have been cooped up for a year now, and the idea of delaying personal and family trips will seem crazy, after what we’ve been through in the past year.

*Last year and this year — far more than most years since I’ve been alive — will be judged as consequential years in the nation’s history. In government, in politics, in criminal justice, in working. Still playing out. Headline writing is a skill, part craft, part science. Sometimes it can be workmanlike, like the “small but serviceable sedan” the Hardy boys used to drive. And sometimes, inspired. Obviously, the goal is to be more toward the “inspired” part of the scale.

My favorite from the past week is from the New York Times, over Maureen Dowd’s weekly column, posted March 5: Cuomo Discovers #MeToo Means #HimToo. Indeed, that looks to be the case. Cuomo is surviving, so far, but the aura of confidence and competence he projected last spring is gone, likely permanently. The legislative ground under him shifted dangerously over the weekend.

#HimToo. Who would have thought? A story: Some years ago, around 1990, I was working as a reporter for the Middletown Times Herald- Record. We had an office on Broadway in Newburgh, one of the “bureaus” the paper had across three counties that helped it keep, for several decades, a deep connection to its local communities. Probably 15 people in the office, maybe a few more, from all departments. And Newburgh was beset at the time by drugs and crime, far worse than is now the case. (I think in many ways it is resurgent now, and of course, it has fantastic housing stock. I don’t mean to discount its troubles, but it is on the way up.)

Anyway, New York state decided — which meant that then Gov. Mario Cuomo and his staff decided — that a pilot program should be instituted that would target a handful of communities across the state to try to beat back these pervasive drug problems. The idea was that the state would bring in financing and resources across the whole range of needed services: It would seek to improve housing stock. Provide more neighborhood policing. Place more drug treatment beds in the community; these were in chronically short supply. More support for families. Job training. A focus on neighborhood schools. On all these fronts, Gov. Cuomo and his point man, Lt. Gov. Stan Lundine, and a coterie of top staff were regularly in Newburgh to check on the progress.

On one trip, Gov. Cuomo was to tour a neighborhood grade school, one of those in the heart of the troubled area. It was just up the hill from the waterfront. I was there to cover it. It was a beautiful day, had to be late spring or early fall. Know this: A Mario Cuomo visit was a production. The kids were ready, neatly dressed, giddy and expectant at this interruption in routine. The teachers were on red alert. Security seemed intense. Lots of black SUVs and men with earpieces. Then more black SUVs swooped in; the governor arrived and stepped out to cheers. And he stooped over, sometimes knelt, as he proceeded toward the entrance. He was shaking little hands. He spoke with many of the youngsters, though these kids wouldn’t even be able to cast a ballot for 10 or 12 years.

I was a few feet away watching the exchanges, lo these three decades ago. A different time, a different governor.