A Bluebird Sky, And Then 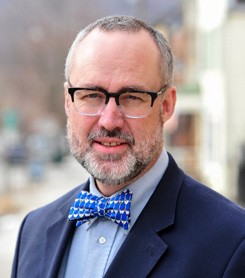 The sky was really blue, a happy-go-lucky fall day kind of blue. It was a Tuesday morning, News 88 on the dial. First came a report of a small plane into a tower, then a revision from a caller, a pilot: It was clearly a jetliner. Then more detail: A passenger jet, one into each tower. Then the traffic report turned surreal, into the war report. We were under attack. It would come to be known simply as 9/11, even today, and everyone knows what you mean.

Eight of those roughly 3,000 people who died were from Putnam County. The eight, and others from Putnam who helped in the cleanup and died since, were remembered at ceremonies Monday evening in Garrison, Putnam Valley and Carmel, as well as one earlier in the day in Brewster. It was a different time. We had such worries; they seem quaint now, don’t they? For weeks on end while driving to work I saw generators and heavy equipment heading to New York City as I drove in; still more equipment headed to a staging area at Stewart International Airport. Too, the funerals went on for weeks and then months, especially in Orange County nearby, where even more of the firefighters and NYC police lived, including dozens of those who died.

We were fortunate, if you could use the word, that the nation, the state and New York City all had competent, professional leadership that was up to the task. Could we say the same today? Not so sure. I remember hearing then Gov. George Pataki speak a few weeks afterward at an economic development dinner. He was late, delayed in New York City. No one complained. The group hung on his updates; he had come from the site directly to this event.

At the newspaper office this year, we made certain to put the flag up. It’s not a holiday. But, in my mind, it is. I’m sure it is for many of you, too.

Douglas Cunningham is editor and publisher. Reach him at 845-265-2468, or by email at editor@pcnr.com. Letters to the editor, on this or other topics, are welcome. Please send by email as plain text or a Word document by 9 am Monday. Campaign letters are welcome, as well; limit to 500 words.