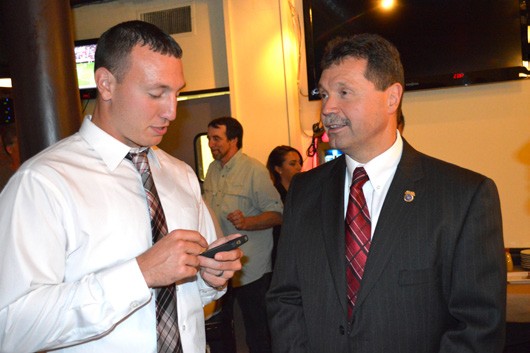 Kevin McConville (right) during the 2013 Putnam County Sheriff campaign. Don Smith trounced him in the primary. Photo by Douglas Cunningham

My goodness. Sometimes the obvious isn’t really obvious until boom! There it is.

I think that’s the case with the election last week. Who thought Don Smith, sheriff, retired brigadier general and tank commander, might get beat? His opponent, obviously, but among the rest of Putnam County, especially those who follow politics? Not many, I’ll tell you that.

Four years ago, Smith faced Kevin McConville, whose qualifications rivaled – if not surpassed – those of Robert Langley, this year’s Democratic candidate. And four years ago, Smith crushed McConville, taking every single contested ballot line from him. GOP, Conservative, Independence. The contest didn’t even get to the general election; the primary decided it – and the Democrats didn’t run anyone.

But this year, it’s the Democratic candidate, Robert Langley, who holds a lead of 335 votes countywide. Absentees will be counted Tuesday evening (today) and will decide the race. And the invincible Smith? He isn’t as invincible anymore.

He may yet triumph. His victory over McConville four years ago was masterful, an arcane assembling of ballot lines and votes and write-in ballots that decided the campaign before it really started.

But make no mistake, this year is a demarcation, perhaps of several things. Smith is weaker than four years ago, no question, bruised by his unsuccessful fight with former District Attorney Adam Levy. I think, though, the results signal more than that.

First, residents aren’t necessarily as tolerant of missteps in office, and the fight with Levy raised significant questions for many. More than that, the results are a sign that the Republican/ Conservative axis – heretofore the path toward success in virtually every Putnam County election save those in Philipstown – is no longer as powerful.

And that means the path toward reelection next year for County Executive Mary- Ellen Odell is markedly more difficult. Likewise, so is the path for some legislators, particularly Republican Legislator Barbara Scuccimarra of Philipstown, who is also up for reelection in 2018. And I think they know it.

The Democrats have been emboldened by the lesson of last Tuesday’s results. If the Democrats nominate serious, credible candidates, and genuinely contest the election, they’ll have an impact. The sheriff’s race demonstrates that. It will take years to change the Legislature. Only three seats are up in any given year. But you have to start somewhere, and it seems the Democrats have started.

Douglas Cunningham is editor and publisher. Reach him at 845-265-2468, or by email at editor@pcnr.com. Letters to the editor, on this or other topics, are welcome. Please send by email as plain text or a Word document by 9 am Monday.