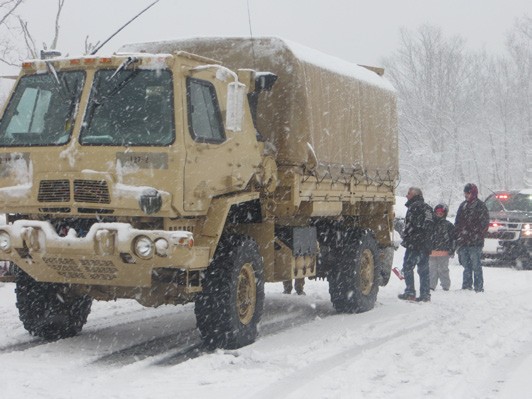 Supplies are unloaded during Wednesday’s storm for a senior citizen complex without power for more than 4 days.

Remember when no matter how bad the storm, we were confident that the crews at NYSEG were on the case, working super-hard in arduous conditions to get the lights back on?

I remember those days, too. I would not count March 3 and 4 among those days.

The utility was overwhelmed and under-performing. Putnam Valley Supervisor Sam Oliverio tells me one crew spent all of three hours in his town before bailing out. Assessing, is the new terminology. Determining the scope of the problem. So resources can be efficiently deployed. The modern business world.

But the fact was, as thousands and thousands of people in Putnam Valley, Mahopac, Carmel and Kent, and to a lesser extent Brewster, Southeast and Patterson, waited in the cold, precious little work was getting done. The actual work of power restoration began in earnest only on Monday and Tuesday. Oliverio was quaint in describing it; he said it was like the “old NYSEG” on Monday and Tuesday.

I’ve come to a couple of conclusions after these several decades as a trained observer, most of it in front-line management posts. The first is this: Sometimes, things cost what they cost. There’s a tendency in management to want to tamp down costs and then tamp them down some more. Surely we can find someone cheaper, right? Get by with fewer people, right? We’ll apply best practices to how those linemen operate, and we won’t need as many!

Except. Except for days like March 2 and 3 and 4. Maybe, if you’re in the utility business, finding and paying sufficient numbers of linemen willing to work amongst high-voltage wires 40 feet in the air in arctic cold is just one of the costs. No matter how much “assessment” is done, the poles and wires still have to be fixed, right?

The second thing I’ve come to believe is that we — the collective we, hundreds of our institutions and companies — fail utterly to appreciate the role of front-line managers and supervisors. They get a hell of a lot of work done. Plus, they’re not so far removed from the field that they can’t still actually DO the work. In the “old days,” it would have been these managers who would rapidly do the “assessments” that now apparently take NYSEG days to wrap up. Sure, you can pare down the managers. Sometimes, they really are just another layer of bureaucracy.

But more likely, I suspect, they know how much time a task is likely to take, what fixes will help the most people rapidly, and where people can be deployed for maximum impact. It is possible, I think, to right-size the workforce so much that it can no longer do the work that’s needed.

So what changed between the old NYSEG and the new NYSEG? Gosh, I don’t know. Could it have been the sale of NYSEG parent Energy East to the Spanish company Iberdrola SA, announced in 2007 and completed the next year? A $4.6 billion deal. Lot of money there. Was it the creation of Avangrid in 2015 with Iberdrola’s $3 billion acquisition of UIL Holdings? Iberdrola now owns 81.5 percent of Avangrid.

It’s here that Avangrid’s recent history history in New York might be instructive. On March 8 2017 — just a year ago, almost exactly — western New York was hit by a devastating wind storm. The response by Rochester Gas and Electric and NYSEG, both part of Avangrid Networks, was so ineffective that it rapidly became clear the power outages would be lengthy, many days. Gov. Andrew Cuomo, as he has in this case, ordered the Public Service Commission to investigate.

And the PSC found a substantial list of failures, including:

*Damage Assessment: RG&E’s required damage assessment did not start as early in the process as it should have;

*Restoration: The companies did not follow the requirement regarding keeping the public informed about restoration times, which created customer uncertainty;

*Life-Support: Although no one was harmed or died, the companies failed to properly coordinate communications with customers who are on life-support equipment;

*Phone Alerts: RG&E did not adequately update its automated voice messaging services to reflect the storm conditions; and

*Call Center: RG&E’s call center was not staffed to the level prescribed in its emergency response plan.

Remember, both NYSEG and RG&E are owned by Avangrid. Faulty or late damage assessments. Downed wires a continuing hazard. Failure to communicate reliable restoration times. Failure to restore critical areas. Sound familiar, anyone? To recap, we have two substantial storms, one year apart. Avangrid repeats many of the same mistakes from the first storm. Almost exactly repeats these mistakes.

I suggest that Avangrid and its owners in Spain are not fulfilling their duties to New York state and to their 890,000 customers of NYSEG. Someone needs to bring them to heel. If Andrew Cuomo and the Public Service Commission are the people to do it, more power to them.

Douglas Cunningham is publisher of both the Courier and its sister paper the Putnam County News and Recorder, in Cold Spring. Letters on this or other topics are welcome. Limit to 500 words. Send to editor@pcnr.com. You can reach Cunningham at that email, or call 845-265-2468.