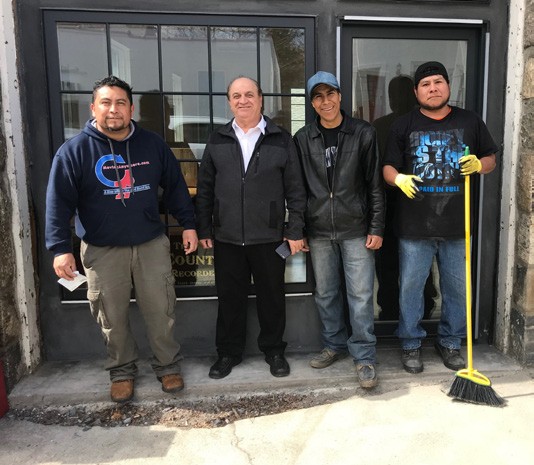 The crew from A Man With a Van & More on Thursday after moving the Courier and PCNR to new office space. Photo by Douglas Cunningham

I’m a believer in the “curated” aspect of a good local newspaper. You know, you can sense, in reading it that some thought has been given to which stories are included, and where they are. And, in the best papers, you will also find stories that surprise you: Topics or takes you never would have expected. Maybe things outside your comfort zone, but nonetheless, important to know to be a good citizen in today’s United States and Putnam County. Perhaps a commentary that upsets you, but is still provocative to read.

In other words, the antithesis of your Facebook feed, which, it seems to me, works mainly to confirm all of our biases, serving up both news and fake news to that end. Again, ratifying what we already believe. A perpetual feedback loop in which stupid ideas, including our own, go unchallenged. In which new people go unmet. New stores go untried. And our worst instincts and tendencies become ever more set in concrete.

This is crazy. We have seen that, now, as Facebook tries to explain why it willingly turned its platform over to Russian actors to cause havoc with our election. And then provided the tools, via detailed ad serving and ad selection, to play on our worst biases. Willingly, Facebook did this. Why, pray tell? Because it then could happily take the money for doing so. Even though Facebook subsequently professes blissful, unknowing ignorance. Like Capt. Renault in Casablanca, who was “shocked – shocked – to find that gambling is going on in here!”

Being a publisher in New York and in America these days entails certain responsibilities. Taxes. Forms. Permits ($100 for an “operating permit” from the village, for instance). Mail permits. Requirements that my housing ads don’t discriminate on the basis of race, sex, gender, family status and so on. And all of that in addition the demands and standards of basic journalism and news judgment.

Fairly frequently, we get an email asking that we place an “advert” for two weeks or four weeks, and that we are to call with a quote for said advertisement, and to get a credit card number. And we know, pretty much know, that every single time this is a scam. We don’t take the bait. We almost never accept out-of-town help-wanted ads. They’re scams, on us and on the people who are looking for work.

Facebook wants to be a publisher. But it wants to do so without any of the responsibilities that go with that. Including that its “news” and “information” have any connection to reality. It wants the money from “adverts” without the responsibility, including any responsibility to the nation at large. This is simply wrong.

On the other hand, we are a curated newspaper. My staffers have no ties to the Russians. Their stories will be edited not by an algorithm but by a journalism school graduate. We present as much of the truth as we know, at this moment. Next week, we’ll have more of it, and we’ll publish that. I thank you for reading, and advertising, and even complaining. We are happy to take on the challenge and the responsibility of being a publisher in 2018.

Last week, on Thursday, we moved to new space for both the Courier and the PCNR, 3 Stone St., in Cold Spring. It’s bright, cheery, a great team atmosphere.

My wife has always been one of those who used a move as a chance to pare down, to purge, to get rid of the unneeded. I confess, I was late to the game on this. But I’m now a believer. We brought only those things necessary to the business, the items that will move us forward. If you find yourself in Cold Spring during the week, stop by. I’d love to chat. In a particularly striking coincidence, we are just down the street from Doug’s Pretty Good Pub.

Douglas Cunningham is publisher of both the Courier and its sister paper the Putnam County News and Recorder, in Cold Spring. Letters on this or other topics are welcome. Limit to 500 words. Send to editor@pcnr.com. You can reach Cunningham at that email, or call 845-265-2468.