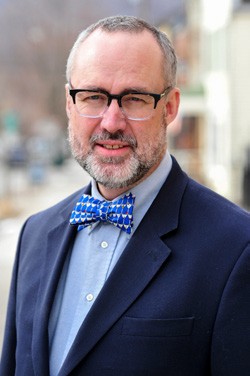 This struck me from Saturday’s Medal of Honor parade: It’s a long stretch from the corner of Gleneida Avenue next to Reed Library down to the Historic Courthouse, where the parade ended and all assembled. So a few sections were sparsely populated, with many more people gathered toward the end, by the Courthouse. But even in those places with not as many people, the applause was loud and sustained as a color guard or band passed by. By force of will and tenanacity, these parade watchers were going to be vociferous, loud in their gratefulness.

And this: Paul Bucha, a Medal of Honor recipient and one of the grand marshals, told the crowd afterward that a greater genuineness and commitment to our veterans is needed. For instance, he said, the phrase, “thank you for your service,” has become ubiquitous. But, he said, “No one says, ‘Are you OK?’ No one says, ‘Can I help you?’”

He suggested that “where are you from?” and “do you need anything?” are reasonable questions to a military person traveling. And if the answer is that they need X or Y, said Bucha, do it! That, he said, would be genuine, a small but needed help to those willing to die in service to the nation.

Related: The Wall Street Journal had a fantastic piece Monday, “A Soldier Never Forgets North Platte.” Since World War II, the community has gathered to feed soldiers passing through, then by train and today by bus. It’s a tear-jerker of a read, and I commend it to your attention.

I am told that the prospect of a Republican primary is diminishing. Both candidates, incumbent County Executive MaryEllen Odell and challenger Paul Denbaum of Kent, filed signatures with the county Board of Elections to run as Republicans. Of Denbaum’s 1,121 signatures, 178 have been contested. One thousand are required to be on the primary ballot, which means the Denbaum forces need to preserve at least 57 of those signatures to compel a primary.

If indeed there’s no Republican primary, that would mean we could move pretty directly to the main event, the race between Odell and Democrat Maureen Fleming, currently the Kent town supervisor. That’s a race that could have some sparks and make for a lively fall.

Both Odell and Fleming marched in the Medal of Honor parade, by the way, on Saturday.

Douglas Cunningham is publisher of both the Courier and its sister paper the Putnam County News and Recorder, in Cold Spring.