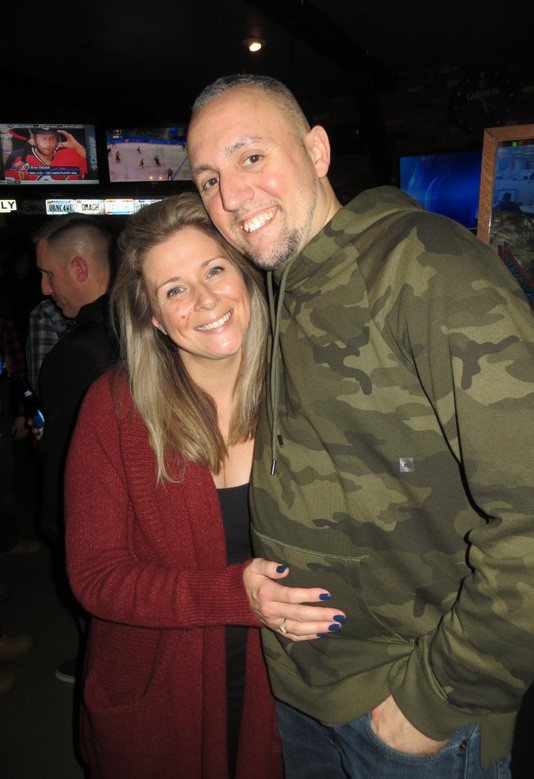 Deputy Michael Schmidt and his wife, Sara, are overwhelmed by the response at Friday’s gathering. Photo by Eric Gross

Deputy Sheriff Michael Schmidt remains hopeful that a perfect match can be found in order for him to receive a life-saving bone marrow transplant.

On Friday evening, hundreds of Schmidt’s friends, colleagues in the field of law enforcement and emergency services as well as total strangers packed into Fiddler’s Green Pub in Carmel to pick up a swab kit which will be mailed to the ‘Be The Match’ national swab registry in the hope that a match will be found.

Schmidt and his wife, Sara, expressed gratitude and love for the tremendous response: “We have been blessed,” said Sara, adding: “Friends as well as total strangers have been so supportive to Michael, our three children and me. We will never be able to repay them.”

Deputy Schmidt agreed: “Seventy percent of patients needing a bone marrow transplant do not have a fully matched donor in their family. Our only hope for a cure is a transplant from someone outside the immediate family.”

The deputy looked around at the sea of humanity inside the pub and with tears in his eyes said: “I will never be able to thank all of those who have come to our aid during this time. All I can say is ‘thanks.’ I love you all!”

The veteran member of the Sheriff’s Department received some good news last fall when the Putnam Legislature agreed to extend his sick leave allowing the officer to continue receiving his paycheck.

The “extended illness that started in 2016 has depleted all of Deputy Schmidt’s sick time that he accumulated through what former Sheriff Don Smith called “the prudent and responsible use of this time throughout his entire career as well as donated time from his co-workers.”

Smith described Schmidt as an “outstanding member of the Sheriff’s Office and Putnam County team who has an impeccable reputation for outstanding performance of duty, especially in community policing which has provided support to all of the county’s six towns and three villages.”

Personnel Director Paul Eldridge noted during his 40-plus years in office, “this was only the third time that an employee had exhausted his sick time due to a dire health situation.”

Individuals aged 18-44 interested in being swabbed to help save Schmidt’s life can contact the Be The Match organization at 1-800-627-7692 or on line at join.bethematch.org/mopower.

One response to “Deputy Spent Lifetime Serving; Hundreds Turn Out As He Seeks Match for Bone Marrow”