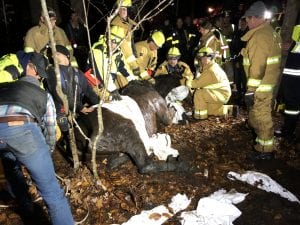 PHOTO BY ANDREW AKIN
A horse is rescued from Wonder Lake State Park in Patterson thanks to the efforts of dozens of emergency responders.

“Tucker,” a 24-year-old horse, was dramatically rescued at Wonder Lake State Park in Patterson after a riding mishap.

The horse was being ridden along a trail in a deep wooded area Saturday evening when it ventured into a pond and became stuck in thick muck.

Patterson Assistant FD Chief Joey Nickisher said the horse started to swim out to the middle of the pond and when it attempted to come back to shore, the “poor horse became entangled in brambles and branches before becoming chest deep stuck in the mud.”

Chief Nickisher said upon arrival, “responders found the horse with its front legs immobile from the mud making the rescue extremely difficult since we could not lift the animal. Back boards used to extricate victims from auto crashes and sheets of plywood were used to stabilize the horse while one firefighter donned an ice rescue wet suit and entered the water in order to place ropes around the horse’s belly.”

The horse was gingerly rocked back and forth while other emergency responders shoveled material away and after a laborious four and one half hour operation, during which Tucker was given anesthesia by a veterinarian, the horse was pulled free. It was suffering from hypothermia and shock.

The animal was taken to the New England Equine Center in Patterson by special trailer where it was treated.

Chief Nickisher said that within 12 hours following his brush with death “Tucker stood up and began eating. That’s one tough horse.”

Assisting at the scene were members of the Putnam Lake, Carmel and Pawling Fire Departments in addition to the Westchester County Technical Rescue Team.