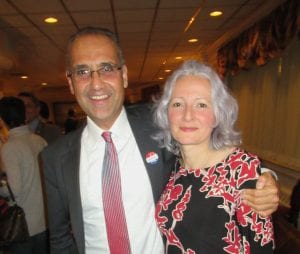 Putnam County Judge-elect Joseph Spofford is congratulated by his fiancée Agnieszka Maslosz on his victory at a celebration in Mahopac on Election night. Photo / Eric Gross

Philipstown Town Justice Camille Linson gave it a fight but her Republican challenger Carmel Town Judge Joseph Spofford was the victor on Election night 10,649 to 7,838.

Speaking before some 200 supporters who gathered at the Villa Barone in Mahopac Tuesday night, County Court Judge-elect Spofford promised to “follow in the traditions of my dear friend Jim Reitz. Jim taught me to have respect for everyone entering my courtroom by treating them fairly. It is an honor to follow him on the bench. I look forward to serving all the residents of our great county.”

In a more subdued setting, a half-mile away at the Four Brothers Restaurant, Linson was greeted by her supporters with hugs and handshakes.

She thanked those for supporting her candidacy: “I’m very grateful to the many people across party lines who worked so hard to share my campaign’s message of Justice for All. I hope that my campaign contributed to awareness of the devastating impact of the opioid crisis on Putnam County families and the need for us all to work together, regardless of party politics, to stop this epidemic. I will continue to dedicate myself to this work and to serve our community in every way I can.”

Putnam Legislators Paul Jonke and Neal Sullivan both ran unopposed while Legislator Carl Albano defeated Rebecca Swan by a tally of 1,222 to 730.

Schanil, a resident of the Hamlet of Carmel, was the top vote getter with 3,746 votes while Lombardi was also victorious tallying 3,654. Hopper came in third with 2,199 ballots.

Schanil becomes the first member of the Carmel Town Board from the hamlet to serve in more than 20 years.

In Kent, Supervisor Maureen Fleming was reelected defeating Richard Kreps by a vote of 1,671 to 1,057. Town Board members Jaime McGlasson and Christopher Ruthven were both reelected as well defeating Anne Campbell and Nina Gerosa. Ruthven tallied 1,529; McGlasson–1,498; Campbell–1,189 and Gerosa-1,097.

Residents of Kent also approved a referendum to increase the town’s contribution to the Kent Library budget by $566,686. The tally: 1,856 to 850.

Alvarez and O’Connor appeared to have won the races yet Eckardt trails O’Connor by some 64 votes with absentee and provisional ballots to be counted Nov. 20.

In the Village of Brewster, Mayor James Schoenig and village trustees George Gaspar and Christine Piccini were all running unopposed.

Judith Farrell and Robert Flaherty were reelected to the Philipstown Town Board with votes of 1,786 and 2,329 respectively. Corey Lyons, the third person in the race tallied 1,117.

Town Clerk Tina Merando was defeated in her bid to win re-election by Tara Percacciolo. The town clerk-elect received 1,532 votes to Merando’s 1,370.

Two others in the race, Anthony Williams and Patricia Villanova received 1,097 and 379 votes respectively.

Residents of Putnam Valley were also asked to increase the town’s contribution to the Putnam Valley Library budget to $398,000. The referendum was defeated 1,316 to 1,475.

In the Village of Cold Spring Mayor David Merandy was reelected defeating his challenger Charles Hustis by a tally of 421-286 while Village Trustees Marie Early and Frances Murphy were reelected defeating newcomer Margaret Parr. Early tallied 434 votes; Murphy received 510 votes and Parr came in a distant third with 247 votes.