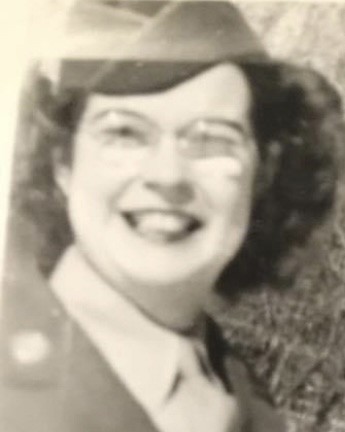 She was born March 3, 1924, in New City, N.Y., daughter of Daniel and Bridget (Kennedy) Stokes. The family later moved to Simpson Road in Carmel, New York and Frances graduated from Brewster High School in 1942.

Frances joined the Women’s Army Corp in 1944, attained the rank of S/Sgt. and returned home in 1946. She joined the Reserves in January 1950, was called to active duty in September of the same year during the Korean Conflict and served in Heidelberg, Germany until 1953.

Frances retired in 1988, and has since been a member of R.S.V.P., volunteering at Eagle Eye Thrift Shop in Brewster and sewing cancer pads for Rosary Hill, Hawthorne, N.Y. She was honored with her 25 year R.S.V.P. pin in 2013. She was also a member of the Guideposts Prayer Fellowship in Danbury, Connecticut and past Treasurer of the St. James Elders.

She is survived by one sister, Anna Murphy of Spring Hill, Florida as well as many nieces and nephews. She was predeceased by her parents, brothers Patrick, Daniel and William Stokes and sisters Margaret Chipchase, Mary Hughes and Elizabeth Folchetti.