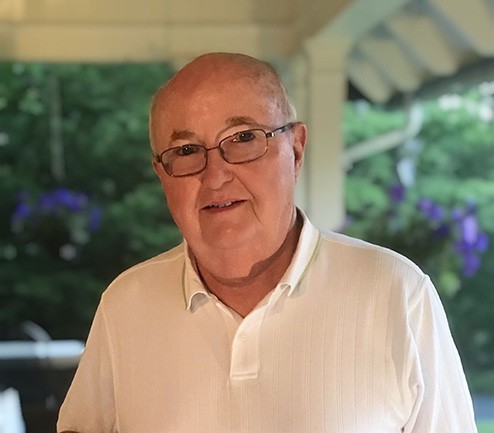 George Francis Whalen, Jr., of Newtown, CT, passed December 27, 2021, after a long battle with Alzheimer’s disease. A gregarious man with a warm heart and an engaging sense of humor, he will be remembered with love by his family and the many friends he made during a life well lived.

George was born to George Francis Whalen, Sr., and Catherine Haley Whalen on May 17, 1941. He grew up in the Parkchester section of the Bronx, NY, and served in the Army National Guard of New York from 1963 until he received an honorable discharge in 1969. He studied finance and public administration at Western Connecticut State College in Danbury, CT, and lived in Carmel for many years.

After a career in corporate finance with General Time, Ethan Allen, and Perkin Elmer, he pursued a dream and at 39 years of age became an officer on the Bethel Police Department. He studied criminal justice at Penn State, and in January 1990 joined the Stamford Police Department where he was promoted to detective investigating financial crimes. He served as President of the Fairfield County Detectives Conference from 2005 to 2006.

George is survived by his wife of 41 years, best friend, and the love of his life Ellen (Ellie) Whalen. They enjoyed retirement together on Main Street, where they moved in April 1997. George is also survived by three sons and their families: Peter and Maria Whalen, of Carlisle, PA, and their children Patrick and Claire; Murphy and Eileen Whalen, of Carmel, NY, and their children Hailey and Aidan; James Whalen, of Frisco, TX, and his children Whitney and Emily; and stepdaughter Meghan Rice, of Newtown. The grandchildren all spent joyful summers on Main Street.

George was a kind, thoughtful, and loving man who adored his family and freely provided help to those in need. He had a quick wit and is remembered for his ready supply of one-liners. He had many friends in all walks of life. In later years, he enjoyed sitting with friends, affectionately known as “The Ladies of the Order of the General Store”, on Saturday mornings at the Newtown General Store. He was an active member of St. Rose of Lima Church in Newtown.

A wake will be held at Honan Funeral Home on Tuesday, January 4, 2022, from 5 to 8 pm. A funeral Mass will be celebrated at St. Rose of Lima Church, 46 Church Hill Road, on Wednesday, January 5th, at 10:30 am. For those unable to attend in person, the funeral will be available for viewing at www.strosechurch.com/live-stream. Donations in lieu of flowers may be made to the Alzheimer’s Association Connecticut Chapter, 200 Executive Blvd South, #4b, Southington, CT 06489.