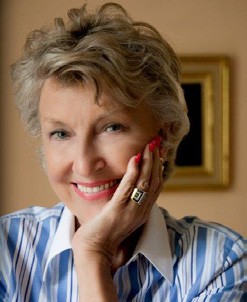 Margaret Whittle Whitcomb (aka “Dear Meg”) of Pawling, N.Y. passed away in the privacy of her home on October 1st, surrounded by her family. She was a published author, syndicated columnist, consummate hostess, politico, and avid reader of The New York Times. Her spirited discourse and supremely gracious manners will be sorely missed by her family and many friends. She was 85.

Born December 14, 1930, in Minneapolis, Minnesota to Ruth Glenny Whittle and Harold Whittle, the family relocated to Beverly Hills, California where Meg found her inspiration to start her long career as a journalist, advice columnist and radio and television personality.

Meg’s writing career began as the society and general news reporter at Beverly Hills High School. After California, she attended the University of Colorado at Boulder and lived in Paris and Rome before landing in New York. There she worked for Life magazine and the United Nations as an international affairs correspondent. Meg also was a press briefing officer for President Richard M. Nixon, and when the family moved to London, she remained active in U.S. politics as the Vice Chairman of the European Republican Committee.

In 1973, Meg added “Dear” to her name when she convinced Rupert Murdoch to add a weekly advice column to his first U.S. publication The Star. The audience for her unconventional advice grew rapidly, and the nationally syndicated column was read by more than 15 million readers who turned to her daily column for guidance, humor and support. Back in New York, Meg capitalized on her popularity by becoming the editor-in-chief at 50 Plus Magazine for several years. Her advice reached the airwaves when she hosted a late night talk radio show with WNBC followed by weekly television spots with Regis Philbin. She also authored three books in the self-help category.

In retirement, Meg’s bicoastal lifestyle included volunteer service with the Eisenhower Medical Center, the Betty Ford Center in Rancho Mirage, California, the Living Desert Museum and the College of the Desert – both in Palm Desert, California.

Meg is reunited with the love of her life, outdoorsman, chef and muse husband Arthur Whitcomb and is predeceased by two brothers, Harold “Hal” Whittle, Jr. and Alex Whittle. Her memorial service will be held on Saturday, October 29th, 11:00am at Christ Church in Pawling, New York. In lieu of flowers, donations to the Pawling Resource Center in Pawling, New York or to SaveOneLife.net are welcome.