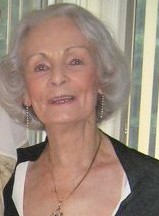 She married Michael “Des” Derwin on September 3, 1955, in Dublin, Ireland. After being married Mona moved with her husband to Heidelburg, Germany while he served in the US army. In 1957, they moved to Queens, NY.

After living in Queens, Chicago, IL and Yorktown Heights, NY, they moved to North Salem in 1969 where they raised their family and Mona opened Derwin Real Estate of North Salem.

Mona was a talented painter and wrote beautiful poetry. She was an avid reader, a bridge connoisseur and loved doing the NY Times crossword puzzles each day.

She attended St. Joseph’s Roman Catholic Church in Croton Falls, NY, and was an active participant in a Charismatic prayer group. For 25 years she held a bible study and brought communion to residents at Waterview Hills and Salem Hills Nursing Homes in North Salem.

Mona is survived by her siblings, Michael Kelly of Dublin, Ireland and Frances Gunning of Attleboro, MA, her children Ann Doyle (Terry) of Pawling, NY and Mark Derwin, of Los Angeles,

She was preceded in death by her husband, her son, Kevin Derwin, siblings Kevin Kelly, Angela Walsh, Maud Moore and Patrick Kelly.

A Mass of Christian burial was celebrated on Saturday August 29, 2020, at St. Joseph’s Church. Interment followed at St. Joseph’s Cemetery. Visitation was on Friday, August 28, from 3pm-7pm at Beecher Funeral Home, Brewster, NY.

In lieu of flowers, a memorial donation may be made to: Alzheimer’s Foundation of America, 322 Eighth Avenue, 16th Floor, New York, NY 10001.