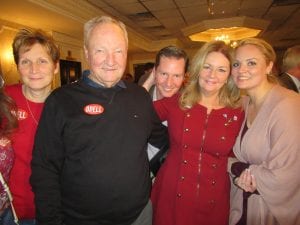 County Executive MaryEllen Odell celebrates her victory on Election night with her dad, daughter, brother and sisters in Mahopac. Photo by Eric Gross

More than 37,000 ballots were cast or nearly 60 percent of those registered balloted at the county’s 86 polling places. Another 3,000 absentee ballots were issued with 2,262 to be counted November 13.

The race that generated the most interest locally was for county executive where Executive MaryEllen Odell defeated Kent Supervisor Maureen Fleming by a tally of 20,293 to 15,718.

The Villa Barone in Mahopac was the scene of a Republican celebration where 200 members of the GOP gathered.

Odell told the enthusiastic crowd: “It was 30 years ago today that my daughter Hope was scheduled to be born. For me, being an elected official is all about family. During my years in public office, I have developed an extended family that helped me support our seniors, honor our veterans, fight the drug crisis while reducing $40 million worth of debt. We have built two great tourist destinations and we have achieved this as a team.”

Odell called the ticket she ran with this year, the “finest group of men and women I have ever run with. I want to tell the people of Putnam County: ‘You are all in very good hands.’”

Odell closed her remarks by telling the assembled group: “This is my last election. It’s been a great ride and I look forward to the next four years but this is the first election I have encountered without the support of my mother or grandmother,” and with her eyes filling with tears, Odell added: “I know they are both looking down from heaven smiling because they have been with me every step of the way as an angel on my shoulder.”

Wednesday morning, Fleming formally conceded the race. In a statement, she said, “I am so very grateful to all of the volunteers and donors who believed in my candidacy and worked so hard on my behalf, as well as all of the voters who cast their ballots for me. It was a level of direct and personal engagement with a county race that Putnam County has never seen, and I hope that the energy built by the campaign evolves into more active participation in and vigilance of our county-level government. We asked important questions about how the county is run, how its people are served and how our tax dollars are spent. We’ve opened the public’s eyes to things that have been kept in the dark for far too long. Now the public must ensure that we are given actual transparency and real accountability. I’ll continue to press the Legislature and the Executive to open County government and refocus their work on issues that really matter to the people of Putnam. And I will continue to work hard for the people of Kent as Supervisor—a position I am honored to hold. As ever, my door is open. Bring me your ideas, Putnam—let’s move forward, together.”

Three seats were decided on the Putnam Legislature. Barbara Scuccimarra of Garrison lost her bid for reelection to Nancy Montgomery. The tally was 2,992 to 2,159.  Joseph Castellano of Southeast was reelected, besting his opponent Scott Reing by a tally of 2,041 to 1,556 and Legislator Ginny Nacerino of Patterson ran unopposed.

In the Town of Kent, Democrat Gary Link was defeated by Republican Chris Ruthven to fill an unexpired term on the Kent Town Board. The tally announced at Board of Elections headquarters was Ruthven 2,653 to Link 2,151.

In Patterson, Anthony Mole faced no opposition for Town Justice and in Southeast, Melinda Montanaro, the Democrat, was defeated by Eric Larca to fill an unexpired term. The tally announced was Larca 3,590 to Montanaro 2,845.

In Brewster, Tom Boissonnault and Mary Bryde were reelected to the Village Board running unopposed while in Cold Spring Lynn Miller and Steve Voloto, also faced no opposition for trustee seats.

While Governor Andrew Cuomo was reelected statewide by a huge margin, his challenger, Dutchess County Executive Marc Molinaro was victorious across Putnam by a vote of 19,838 to 15,257.

Putnam County Judge James Reitz led the list of Republican candidates garnering the most votes across the county, 20,453, but fell short in his bid to win a seat on the high court.

Harckham lost to Murphy in Putnam by a tally of 14,171 to 8,111 but his Westchester supporters overwhelmingly endorsed the candidate. District wide, Harckham tallied 51,229 votes to Murphy’s 47,714.

Harckham told a victory celebration in Mt. Kisco that “America had become dangerously divided. Division may win elections occasionally but it is not any way to build a sustainable community. Words matter, tone matters, truth matters and justice matters. We are stronger when we work together and everyone has a seat at the table. Diversity is America’s greatest strength and I appreciate the support received from Afro-Americans, Hispanic Americans, Muslim Americans, Jewish Americans and our LGBTQ brothers and sisters as well as all Americans throughout the Hudson Valley.”

Serino defeated Smythe in Putnam by a tally of 7,081 to 6,758 and district wide leads by 2,100 votes with some 10,000 absentee ballots to be counted in both Putnam and Dutchess.

Two members of the State Assembly representing constituents in Putnam also faced reelection. Kevin Byrne defeated Vedat Gashi while Assemblywoman Sandy Galef was victorious over Lawrence Chiulli. In Putnam, Byrne tallied 15,908 to Gashi’s 10,170 and Galef’s numbers in Putnam were 5,342 to her opponent’s 3,838.

While O’Donnell was the victor in Putnam by a tally of 18,538 to 17,380, the incumbent was the winner district wide that encompasses all of Orange County and sections of Dutchess and Westchester in addition to all of Putnam. The overall tally: Maloney–130,420 to O’Donnell–106,381.

Maloney thanked the “people of the Hudson Valley for putting their faith in me and renewing my contract for another two years. It’s been the honor of my life to represent my neighbors in Congress and I look forward to fixing or broken health system, supporting our veterans and fighting the heroin and opioid epidemic.”