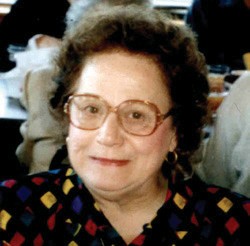 Pauline L. Tomei, age 94, died Thursday, September 29, 2016, with her family at her side at Putnam Hospital Center in Carmel, NY.

Pauline was born on December 12, 1921, in Manhattan, NY to Giuseppe and Antonietta (Soda) Tedone. She was a 1940 graduate of Wadleigh High School in Manhattan. Following high school, Pauline was a secretary for several different companies.

Pauline married Frank P. Tomei on September 29, 1946, at Immaculate Conception Church in the Bronx. Pauline and Frank lived in the Bronx until moving to Blooming Grove, NY in 1982, where they lived for 16 years. They moved to Cornwall-On-Hudson in 1998, where they resided until 2014, when they moved to the Plaza at Clover Lake in Carmel, NY.

Pauline saw the good in every person. She developed friendships everywhere she went, a result of her friendly and open nature. She enjoyed participating in and organizing community activities, including the Senior Center, Bingo, and library functions. She was selfless and utterly devoted to her family. She was so very proud of each and every one. Her husband, children, granddaughters, and great-granddaughters were the light of her life. Her loyalty and desire to focus on what really matters in life are old-world values that inspire her family and those around her.

Pauline loved cooking and baking, and found great joy in preparing delicious meals and desserts for family and friends. She was known for her love of flower and vegetable gardening. She was a Scrabble champion and a member of the Poetry Club at the Plaza at Clover Lake. She wrote inspirational poetry about life and nature, enjoyed by many. Pauline belonged to sewing and crocheting clubs, and enjoyed playing Tennis, Softball, Swimming, and Bowling in her younger years. When living in the Blooming Grove area, she assisted with the crafts program at the Arden Hill Home for seniors.

Besides her devoted husband of 70 years, Pauline is survived by her two children, Frank Tomei (Linda) of Alexander, IA and Elaine Wolfson (Alan) of Brewster, NY; a brother Fred Tedone (Christine) of Wappingers Falls, NY and a sister, Rose Cianci of Ridgefield, CT, a sister-in-law Marie Tedone of Poughkeepsie,

NY; two grandchildren, Stephanie Sandler (Terry) and Natalie Wolfson-Ford (Ryan); and two great-granddaughters, Madeline and Margo Sandler; as well as many nieces and nephews. She was predeceased by her older brother, Michael Tedone, and younger brother, Vincent Tedone.

A Mass of Christian Burial was celebrated on Tuesday, October 4, 2016, at 10 AM at St. Lawrence O’Toole Church in Brewster, NY. Interment followed at Poughkeepsie Rural Cemetery, Poughkeepsie, NY. Friends called at the Beecher Funeral Home, 1 Putnam Ave. Brewster on Monday, October 3, 2016, from 4 to 8 PM.