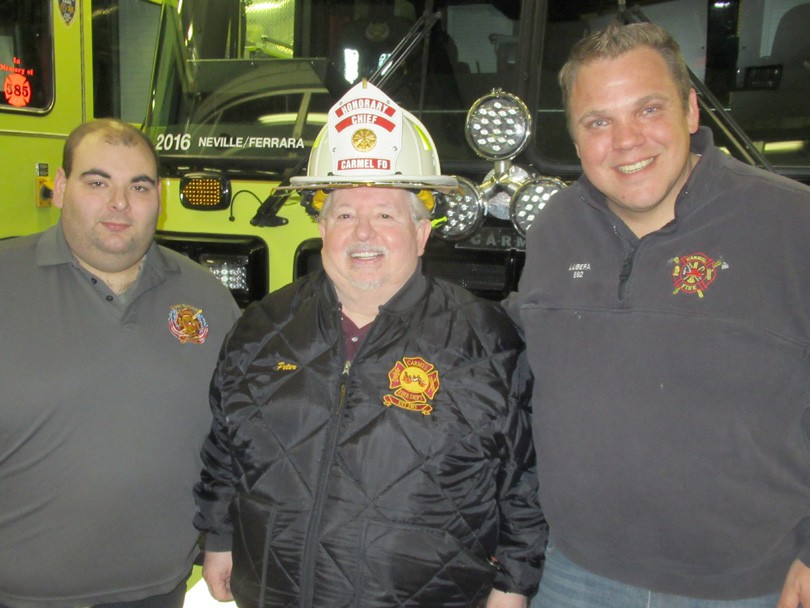 Peter Madden is now an honorary chief of the Carmel Fire Department.

The 47-year member of the volunteer fire service received his special recognition at the department’s installation dinner in Danbury last weekend.

Madden recalled joining the fire department in 1972, after his late brother-in-law, Don Pearlman, another honorary chief, urged him to become a member.

“Don held weekend family picnics throughout the summer in those days and on one occasion a call was received by the fire department reporting a lost child near the West Branch Reservoir. Everyone attending was a member of the fire service and when I saw these men drop what they were doing and run to help find the child, I was in awe over the camaraderie among the members of the Carmel FD. I joined Don the following Tuesday night at the firehouse and the rest is history. Joining the fire service was one of the best decisions I ever made,” he said.

The missing child, by the way, was found sleeping peacefully beneath a tree along the reservoir’s shoreline.

Over the years, Madden served as lieutenant on several occasions and captain once. He remains active today with the Carmel FD Fire Police unit.

Carmel First Assistant Chief Matt Lubera described Madden as a treasured member of the fire service: “Pete is a go-to guy. Whenever something is needed, Pete is always ready and willing to assist. He gives the younger membership great wisdom by always leading in the right direction.”

More From News Go To The News Section