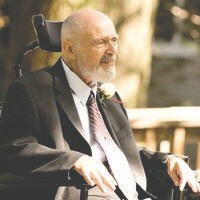 Ray Mainiero was an inspiration.

Wheel chair bound after suffering massive trauma when struck by a car while jogging around Lake Mahopac on the final day of school in 1987, died August 17 at the age of 85.

Mainiero taught biology at CHS as well as coaching tennis until his retirement in 2001.

“Ray took great joy in teaching for 38 years, even returning to school and teaching from his wheelchair following the accident. This and so much more was possible thanks to his wonderful team of nurses who cared for him,” said his wife of 55 years, Alice, who was always at her husband’s side.

Prior to the unfortunate accident, Mainiero was an avid athlete who enjoyed skiing, running and playing tennis. He was a lover of nature and was happiest outdoors whether hiking, camping or sitting under his beloved trees.

Sally McCracken, a long time teacher and administrator in the Carmel School District, who retired 25 years ago, remembered Mainiero as an “outstanding educator. He was so in tune with his students both in the classroom and on the tennis court. His love for his ‘kids’ gave Ray the impetus to return to the classroom following the terrible accident that left him paralyzed.”

One of Mainiero’s tennis players at CHS was Andrew Gross, a member of the Class of 1989.

Gross recalled Mainiero’s excellent style of teaching: “He was caring and concerned while expecting the best from his students. Mr. Mainiero taught me so much on the tennis court.”

Prior to his career in education, Mainiero served in the U.S. Marine Corps.

Alice Mainiero remembered her husband as a man who was devoted to his family because “to Ray family was everything. His most cherished moments were spent with me, our children and grandchildren at the beach, in the woods or watching us play in the family pool.”

In addition to his wife, Mainiero is survived by his children Trisha Mainiero, Joanne and Brett Erenberg, James Mainiero and Michael and Crystal Mainiero as well as five grandchildren Jacob, Joshua, Eden, Connor and Skye.

His brother Leonard predeceased him.

A celebration of Mainiero’s life was held last week at the Cargain Funeral Home in Carmel.

The family has requested in lieu of flowers donations in Mainiero’s name be made to the Christopher and Donna Reeve Foundation or the Paralyzed Veterans of America.