Left: One of the warning signs posted in the Patterson Town Hall women’s bathroom alerting people of the high level of nitrate. This photo was taken on June 22, five days before the Town Hall Meeting where Richard Williams denied receiving the letter from the Putnam County Department of Health. Right: The Patterson Town Hall Photos by Mary-Margaret Dwyer

Three years have passed since Jennifer Gallagher, a Patterson resident, had the luxury of drinking her own tap water. Put another way, three years since she could boil water for pasta or brew a cup of tea. Three years since Gallagher didn’t have to worry about ordering eight 5-gallon water jugs from Poland Spring every month.

It was May of 2015, at her house on Sapling Court, when Gallagher noticed a strange taste to her water. She decided to have her water tested for different contaminants by the Putnam County Department of Health. The results confirmed the family’s worst fears. Shockingly high levels of nitrate, sodium, chloride and even lead, were discovered in the water Gallagher and her family had been drinking.

Gallagher quickly reached out to as many public officials and experts as she could. She first went to her plumber, only to find that the cause of contamination was not a septic issue, but an external one. But where was the contamination coming from? What happened three years ago? There have been suggestions of road salt being the root of the problem. The Sapling Court cul de sac does not have proper drainage, therefore the melting snow and salt can seep into the private wells. However, Gallagher’s well is 250 ft deep, not shallow enough for road salt to be the issue. The problem, in fact, may lie in the local aquifers. 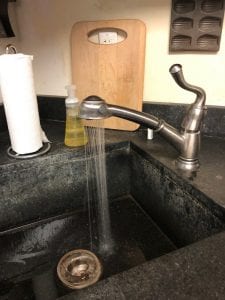 The contaminated tap water runs through Gallaghers’ kitchen faucet. White residue can be seen on the sides of the sink, a result of the various chemicals eating away at the material. Photo by Mary-Margaret Dwyer

The construction of Paddock View Estates, a residential development in Patterson, had commenced as of February 2015. Coincidentally or not, 2015 marked the beginning of Gallagher’s endless water struggles. The development would be getting its water from the aquifers, dipping into an already crowded water source.

The Town of Patterson has known about the dangers of overusing its aquifers for many years. In a comprehensive plan of the Town of Patterson dated August 21, 2000, Section 8.24 states that “high-density development may also consume more water than the aquifer’s rate of recharge and deplete the resource. In addition, high-density development can release into the groundwater more pollutants than may be safely diluted or filtered prior to their reaching the aquifer.”

In other words, the comprehensive plan itself foretold how new development could have been the spark that ignited the residential water problems in Patterson. In such a scenario, the development pushed the aquifer to its limit, sucking in too much water for it to handle. As a result, the aquifer could not properly filter out contaminants, leaving residents like Gallagher stuck with no drinkable water.

They can’t drink the water at the Patterson Town Hall either; it is contaminated too. According to the Putnam County Department of Health, the water contamination poses a present threat to public health. After testing their water multiple times, the Department discovered high levels of nitrate. Two recent tests showed similar results.

In a letter addressed to Richard Williams, Patterson Town Supervisor, from the Putnam County Department of Health dated June 1, water test results from May 22 show the nitrate level of Town Hall to be 33.8 mg/L and results from May 29 show a nitrate level of 18.2. “The maximum contaminant level (MCL) for nitrate is 10 mg/L, however, an MCL of 20 mg/L is permitted at a noncommunity water system,” according to the health department. These high results prompted the Department of Health to mandate that warning notices be placed near all sources of water in the Town Hall building. The Department of Health also stated in their letter that “since the average of the two samples collected in May is calculated as 26 mg/L, a [water] treatment system must be installed.”

“What water system would I require here?” asked Williams, in a video taken of a Town Hall meeting on June 27, nearly a month after the initial letter from the Putnam County Department of Health was sent. Jennifer Gallagher, in the open forum during the meeting, explained to Williams that she had seen the test results, and the letter from the health department, courtesy of the Freedom of Information Law. “That’s very interesting, because I don’t have that letter,” said Williams, even though the required warning signs mandated in the letter can be seen today in the bathrooms of Town Hall, dated June 2018, and were up at least a week before the June 27 Town Hall Meeting. Williams has chosen to not make a comment regarding this matter.

As stated in the warning notices in the Town Hall bathrooms, “Nitrate in excess of 10 mg/L may cause Blue Baby Syndrome or Methemoglobinemia in infants less than 6 months of age.” The Department of Health has also noted that while adults and children older than 6 months are less susceptible to nitrate-related illnesses, “those who have certain gastrointestinal disorders that substantially reduce stomach acid and favor the production of nitrite from nitrate may also have a greater risk for illness than the general population.”

In residential homes like the Gallaghers’, these health risks are even more serious, especially when people are unaware of what lurks in their water. While public water systems are regularly tested for such contaminants, testing in private wells is up to the homeowner’s discretion. Gallagher has done her part as a homeowner, testing her water for contaminants. Most recent testing results included a chloride level of 590 mg/L, 340 mg/L over the EPA legal limit of 250 mg/L, and a sodium level of 355 mg/L, 335 mg/L over the regulation of 20 mg/L.

Unfortunately for Gallagher, and other New York State homeowners, the jurisdiction of this issue falls into somewhat of a gray area. The town can’t be responsible for the private wells, but if the contaminant issue is external, that’s another matter.

Gallagher and her family are virtually helpless in their situation. She has worked tirelessly to get help from local government officials, county officials, and even state officials, receiving minimal response and minimal assistance. There are few solutions for the family, most too expensive to be realistic. And since their water is non-potable, they don’t even have the choice to sell their home. “I would allow them to condemn my house,” said Gallagher tearing up. “It has zero value to us.”

Patricia Chappas, an Associate Real Estate Broker for Century 21 Alliance Realty Group in Wappingers, confirmed that you couldn’t sell a house with non-potable water. “I don’t think it would be financeable,” said Chappas.

Peggy Boyle, another a resident of Sapling Court, has also given up with her own water problem. Like Gallagher, she hasn’t had drinking water for three years. “I’m ready to just walk out on my house,” said Boyle, who has lived in her home for about 40 years. Boyle bathes her grandchildren in Poland Spring water when they visit, to avoid getting them sick.

This issue is not just on Sapling Court, or at the Town Hall. Other residences and public buildings within the hamlet have reported non-potable water. Even the Patterson Fire Department has high levels of iron in their water; now only two out of their five wells are functional. “This seems to be a hamlet wide issue,” said Gallagher. “We’re in desperate need of some sort of public water treatment.”

It is unknown whether Patterson will ever establish a public water treatment system. Doing so, however, would come at a great expense. Until then, people like Jennifer Gallagher and Peggy Boyle will continue to live on large jugs of Poland Spring, costing each of them well over $50 per month.

While the Patterson problem, in the scheme of water troubles, is not as extreme as the contamination just over the Hudson River in Newburgh or the crisis in far away Flint, Michigan, it poses the question when does the problem become a crisis?

Early Voting Sets Records in Putnam County: More Early Votes Cast Over The Weekend Than In All Of 2019Late News: Two From Mahopac Killed In County Line CrashAndrew Krivak Freed But Still Not Vindicated