By Chet Gordon Special to the Courier 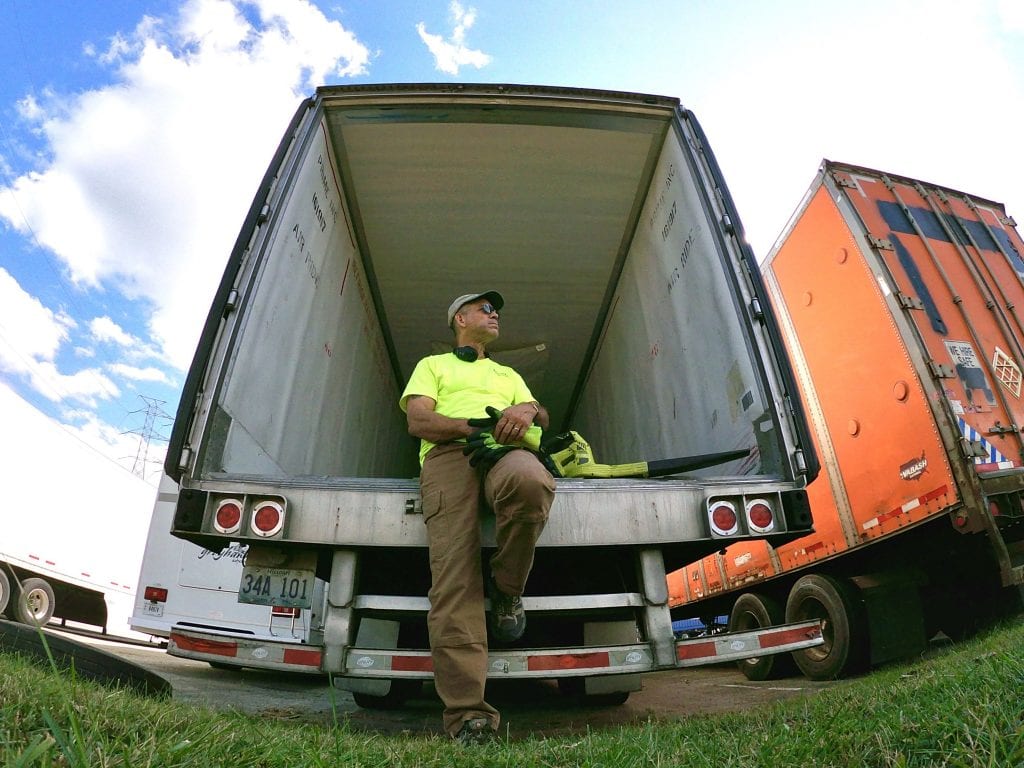 Chet Gordon in the back of a semi-trailer. The long-haul truck driver writes that if our grocery and food supply chain is interrupted, things will become dire quickly. Photo courtesy Chet Gordon.

Editor’s Note: I worked with Chet, an accomplished journalist and photographer, for several years at the Times Herald-Record in Middletown. He’s now a longhaul commercial truck driver, and wrote this in mid- March. Since then, things have only gotten grimmer.

I’m an OTR (Over the Road or long haul) commercial truck driver and here’s why the Coronavirus terrifies me … (The following observation from the road is not intended as a political critique.) #truck #trucking #iphone8plus #wakefern #NJ #elizabethnj #runhard #ohwegonnarun

Finally, the American people are coming to terms that the coronavirus global pandemic is no joke. Earlier this week, in almost a comedic form and as if on cue, store shelves were stripped bare of toilet paper, antibacterial wipes and disinfectants. Toilet paper? As of today, all professional sports leagues have suspended or canceled their seasons, Broadway has gone dark, major music festivals have been canceled, universities and school districts have closed, and some states have implemented bans on mass gatherings of as little as 250 people (now down to far smaller numbers, and in NYS, the governor has since banned all non-essential gatherings of any kind).

Major airlines have reduced their routes as domestic and international travel has dropped after corporate business travel began canceling conferences, along with travel for their employees. Italy has been brought to its knees. Celebrities, athletes, international government officials and members of their families have tested positive for the virus. Some have already died. In Iran, burial pits for the dead are now large enough to be seen from space.

It seems that no one is willing to acknowledge the very real potential mass chaos if the perishable and grocery supply chain network is disrupted in this country. Imagine for a few moments if a percentage of the unseen low-wage farm, livestock and migrant workers, along with meat, seafood and poultry processing plant workers, as well as the warehouse workers, loaders, dock workers, and truck drivers, were to succumb to the virus. This is an industry where none of us can “tele-work” from home and our work affects the health and well-being of every single person in this country. Everybody has to eat.

I haul loads throughout the country ranging from bulk potatoes, fresh meat, chicken, pork and seafood, frozen foods, dairy products, fresh tropical fruit directly off the cargo ships, to medicines and hospital supplies, and other non-foodstuff items. In addition to that, most of us (like me) work weeks at a time on the road and some even choose to spend months away from home out here.

Let’s hope that the medical community can begin to slow the spread of this infectious virus, before things get really ugly in this country.